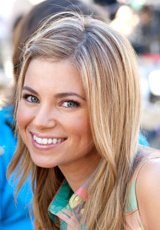 Jenny Swanson is a hot cheerleader at Pinkerton High. RJ Berger is in love with her, but she's dating Max Owens, a football stud (and the school bully). However, in the released clip for the show, it appears that Jenny might be breaking up with Max... Read More

The Hard Times of RJ Berger is an MTV series that will premiere in June 2010. The series orbits the hilariously-hellish lives of nerdy RJ Berger, (played by Paul Iacono) and his scheming, sex-obsessed best friend, Miles Jenner (played by Jareb Dauplaise). Other than pining after the girl of his dreams, Jenny Swanson, receiving daily beatings from the meanest jock in school, Max Owens, and evading the stalker-ish advances of Lily Miran, there really isn't much excitement in RJ's life. That is, until his anatomical gift is accidentally exposed to the entire school...Read more... 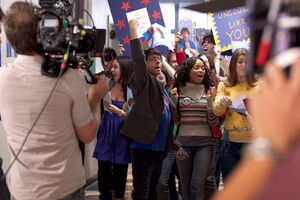 Paul Iacono plays RJ Berger in the new MTV scripted comedy, The Hard Times of RJ Berger, a series about a nerdy nobody who becomes huge when the whole school finds out he's...hung!

Contribute to This Wiki

To write a new article, just enter the article title in the box below.

Retrieved from "https://hardtimes.fandom.com/wiki/MTV_Hard_Times_Wiki?oldid=4043"
Community content is available under CC-BY-SA unless otherwise noted.